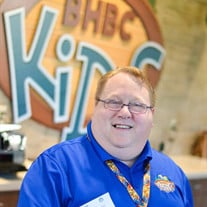 Rev. Aaron Michael Holloway, of Dallas, Georgia, unexpectedly passed into the loving arms of Jesus on Monday, December 20th, at the age of 47. Funeral Service will be held at 1:00 pm on Wednesday, December 29, 2021 at Burnt Hickory Baptist Church in Powder Springs with Pastor Matt Petty officiating. Interment will follow at Pine Ridge Memorial Park in Kennesaw, Georgia. Aaron is survived by his wife of 21 years, Christina D. Holloway (Ansted); their three daughters, Kayla Grace, Kendall Joy, and Kathleen Mae; his parents, William Edward and Brenda Jean Holloway of Milford, Delaware; his brother, William Edward Holloway, Jr. (Bill) and wife Carrie of Mechanicsville, MD; his sister, Amy Nicole Stark and husband Christopher of Milford, Delaware; two nephews, Justin Holloway and Tyler Stark; two nieces, Alexis Holloway and Eleanor Stark; mother-in-law, Doris Ansted and brother-in-law, Lawrence Ansted both of Bowie, MD. He was preceded in death by his sister, Jennifer Nicole Holloway, who died on June 2, 1978. Aaron was born on July 11, 1974 in Aurora, Colorado. He accepted Jesus as his Savior at age nine. On November 18, 2000 he married the love of his life, Tina, at Grace Baptist Church in Bowie, Maryland. On July 9, 2003; June 13, 2007; and July 27, 2011 respectively, they welcomed their three beautiful daughters into their family. His girls were his pride and joy. He graduated from Charles County Community College with his Associate in Arts in August, 1997. He went on to receive his Bachelor of Science in Business Management and Communications from Western Baptist College in December, 2000. He received his Certificate of Ordination from Burnt Hickory Baptist Church on September 7, 2008. He later graduated with his master's degree in Liberal Arts from Dallas Baptist University in May, 2015. The evidence of God's calling on Aaron's life to minister to children and families was recognized by all who knew him. He worked as a teacher in Charles County, Maryland before accepting the call to become an AWANA missionary. He was then licensed to be the Minister of Children at Grace Baptist Church in Bowie, MD on September 19, 2001 where he grew under the mentorship and pastoral fellowship of Pastors David Price and Tim Albritton. He was called to Burnt Hickory Baptist Church on January 8, 2007; and would have completed his 15th year of service in January, 2022. While at Burnt Hickory, Aaron considered it a high honor and privilege to have served under Pastor Mike Stephens and then under Pastor Matt Petty. Aaron was a devoted father and husband. He enjoyed spending time with his family, singing and playing the piano. He delighted in making people laugh, telling stories and spending quality time with friends. He loved the Lord with his whole heart, and ministered to children and their families from the overflow of that deep and abiding love. He will be deeply missed by his family, friends, and by all the children who lovingly called him "Pastor Aaron." 1 Thessalonians 4:14 "For we believe that Jesus died and rose again, and so we believe that God will bring with Jesus those who have fallen asleep in Him."

Rev. Aaron Michael Holloway, of Dallas, Georgia, unexpectedly passed into the loving arms of Jesus on Monday, December 20th, at the age of 47. Funeral Service will be held at 1:00 pm on Wednesday, December 29, 2021 at Burnt Hickory Baptist... View Obituary & Service Information

The family of Aaron Michael Holloway created this Life Tributes page to make it easy to share your memories.

Send flowers to the Holloway family.